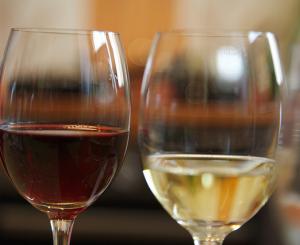 So-called natural wines have recently supplanted kale as the “it” staple of trendy tables — the “latest in holier-than-thou drinking,” according to The Financial Times. Farmed organically and made with minimal intervention, the wine in these special bottles is not to be confused with what one natural wine festival called “industrialized, big-brand, manufactured, nothing-but-alcoholic-grape-juice wines.” In other words, what most of us drink.

The mania for natural wine has puzzled many: How can wine, presumably a simple mix of grapes and yeast, be unnatural? Yet when it comes to sub-$40 wines — the sweet spot for American drinkers, who spend an average of $9.89 per bottle — the winemaking process can be surprisingly high-tech. Like the Swedish Fish Oreos or Dinamita Doritos engineered by flavor experts at snack food companies, many mass-market wines are designed by sensory scientists with the help of data-driven focus groups and dozens of additives that can, say, enhance a wine’s purple hue or add a mocha taste. The goal is to turn wine into an everyday beverage with the broad appeal of beer or soda.

But they are wrong. These maligned bottles have a place. The time has come to learn to love unnatural wines.

As a trained sommelier, I never expected to say that. I spent long days studying the farming practices that distinguish the Grand Crus of Burgundy and learning to savor the delicate aromas of aged Barolos from organic growers in Piedmont. Yellow Tail, that cheap staple of grocery stores and bodegas, was my sworn enemy.

When Treasury Wine Estates, one of the world’s largest wine conglomerates, invited me to California for a rare view into how its inexpensive offerings are — in industry parlance — “created from the consumer backwards,” I was prepared to be appalled. Researchers who’d worked with Treasury spoke of wine “development” as if it were software or face cream. That seemed like a bad sign.

Then I learned Treasury had parted from the tried-and-true method of making wine, in which expert vintners create bottles that satisfy their vision of quality. Instead, amateurs’ tastes were shaping the flavors.

I watched this process unfold in a cramped conference room where Lei Mikawa, the head of Treasury’s sensory insights lab, had assembled nearly a dozen employees from across the company. First, Ms. Mikawa had the tasters calibrate their palates, so they shared a consistent definition of “earthy” or “jammy.” In a few days, they would blind taste 14 red wines and rate the flavors of each. (The samples usually include a mix of existing Treasury offerings, unreleased prototypes and hit wines that the company may hope to emulate.) Next, approximately 100 amateurs from the general public would score the samples they liked best. By comparing the sensory profile of the wines with the ones consumers most enjoyed, Ms. Mikawa could tell Treasury what its target buyers crave.

Maybe they’d want purplish wines with blackberry aromas, or low-alcohol wines in a pink shade. Whatever it was, there was no feature winemakers couldn’t engineer.

Wine too full of astringent, mouth-puckering tannins? Add Ovo-Pure (powdered egg whites), isinglass (fish bladder granulate) or gelatin. Not tannic enough? Replace $1,000 oak barrels with stainless steel and a bag of oak chips (toasted for flavor), tank planks (oak staves), oak dust (what it sounds like) or a few drops of liquid oak tannin (pick between “mocha” and “vanilla”). Cut acidity with calcium carbonate. Crank it up with tartaric acid. When it’s all over, wines still missing that something special can get a dose of Mega Purple, a grape-juice concentrate that has been called a “magic potion” for its ability to deepen color and fruit flavors.

More than 60 additives can legally be added to wine, and aside from the preservative sulfur dioxide, winemakers aren’t required to disclose any of them.

This should have been the ultimate turnoff. Where was the artistry? The mystery? But the more I learned, the more I accepted these unnatural wines as one more way to satisfy drinkers and even create new connoisseurs.

For one thing, winemaking has long fused art with science, even if that’s not the story drinkers are told. Ancient Romans doctored their wines with pig’s blood, marble dust, lead and sulfur dioxide. Bordelaise winemakers have been treating their wines with egg whites for centuries. And though the chemicals dosed into wine can sound alarming, some, like tartaric acid, already occur naturally in grapes. The only difference is that today’s winemakers can manage the process with more precision.

This technological revolution has democratized decent wine. Thanks to pumps and powders, drinkers who can’t splurge no longer have to settle for plonk. The gap between fine wine and commercial wine is shrinking as producers use chemical shortcuts not only to avoid blatant flaws, but also to mimic high-end bottles. They can replicate the effects of oak for a fraction of the price of real barrels, correct for inferior climates and keep quality high in crummy vintages. “It is one of the ironies of the wine market today,” the wine critic Jancis Robinson writes, “that just as the price differential between cheapest and most expensive bottles is greater than ever before, the difference in quality between these two extremes is probably narrower than it has ever been.”

In 2007, it was the rare mass-market bottle that could meet the minimum score that Tragon, a market research firm, considered necessary for a product to be viable. In tasting panels, drinkers choked down these wines, assigning them the same low ratings as spinach and peas. Now panelists routinely award these bottles the same top scores as high-end ice cream.

This is not to say that Treasury’s mass-market offerings are interchangeable with First Growth Bordeaux. When I sipped the wines that Ms. Mikawa gave her panel to try, I was reminded of root beer with a splash of Hershey’s syrup and vodka. The wines were rich, syrupy and heavy.

In this sense, they aligned nicely with the tastes of many newbie wine drinkers, who tend to prefer sweet wines that are low in astringency, bitterness and complexity. That also made these bottles pretty much the antithesis of what the cognoscenti consider “good.”

This is why breaking with the omniscient winemaker’s tastes is so savvy: Research shows that experts and consumers disagree on what makes for a delicious bottle. A study published in the journal Food Quality and Preference, for example, gave amateur and trained tasters 27 wines to rate, and determined that the “liking patterns” of consumers are in some instances exactly “opposite to experts’ quality perceptions.”

And the trend is spreading. Treasury’s sensory research lab was the first of its kind when it opened in 1989, under the oversight of Beringer Vineyards. Other wine giants, like E. & J. Gallo and Constellation Brands, have followed suit.

There is an irony to oenophiles’ definition of quality: What they deem “bad” wine is really wine that tastes good, at least to large numbers of drinkers. And what’s so bad about that? What is wine but a drink of pleasure? Parallel trends exist in music, fashion, movies and art, where the lowbrow and highbrow coexist.

At the very least, these mass-market bottles are an invitation to people who might otherwise never pick up a glass. Ms. Mikawa sees her wines as training wheels for future oenophiles. It’s all part of the natural evolution of taste, even if it starts with unnatural wines.