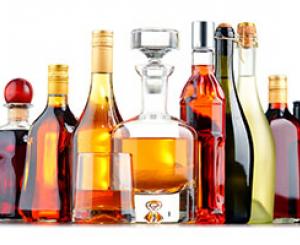 It’s moving day, and you’re finally scrubbing every nook and cranny that you’ve routinely neglected on cleaning day, because surface cleaning is “good enough.” As you rummage through your kitchen, you find a half bottle of cheap vodka that somehow got shoved aside during a party from over 6 months ago, left to be abandoned like patchwork denim. Not wanting to be wasteful you wonder, “Does vodka go bad?” It’s a question most of us adults have pondered at some point. Not limited to just hard liquor but wine, beer, and mixers as well, I constantly find myself questioning if that half empty bottle is okay or if I’ll end up going blind upon the first sip. What I have found on the ever important question of expired alcohol is luckily an optimistic one. Phew!

First, most alcohol can never really go “bad,” per se. Since alcohol fortunately kills germs, there is no actual reason for anything unnecessary or creepy crawly to grow in your liquor. That being said, light, temperature, and air can alter the flavor of your alcohol especially after you have opened it. If you plan on imbibing in only the best your favorite liquor has to offer, then you should drink that baby as quick as you can. Once you pop open the bottle, you allow air to enter, and thus begins the oxidation process, and furthermore the taste will alter, and not for the better.

The good news is that most hard liquor will remain drinkable indefinitely if it remains unopened. As mentioned above however, after opened, they will only begin to deteriorate, and thus your bar cart’s heart begins to slowly die with it. The following is a list of liquors, mixers, beer, and wine, with a guide to knowing if they are still in their prime.

Vodka: There are numerous ways to enjoy vodka. While vodka can be made in an array of ways including with potatoes, sugar, corn, grains, or even soybeans, this diversity leaves the question of vodka shelf life. Does vodka go bad? Do these different ingredients affect how long it remains of quality after opening? The answer is no! Since all vodka has a high ABV (alcohol by volume), the alcohol will continue to keep your favorite vodka nice and tasty after opening. If kept in a cool, dark place vodka may last indefinitely after opening. As time goes on it will lose its alcohol content, so after a decade or so the liquor may dip to below 25% abv. Keep an eye out, if not stored properly it may develop a strange odor and will need to be tossed. Flavor-infused will diminish much more quickly, since natural and artificial flavors such as vanilla, citrus, and berries have a much shorter shelf life than the vodka itself. Enjoy flavored vodkas within 90 days of opening, or better yet, inside of a month.

Whiskey: Can whiskey go bad? Whiskey, like other liquors, has a pretty stable shelf life. While most whiskeys can stay tasting pretty much like new for years with the proper liquor storage, heavily peated whiskies can lose their flavor much more quickly. These dense whiskies usually stay tasting like new for a month or two after opening. After this window, the signature smokey flavors will begin to leave the spirit. If you plan on enjoying your whiskey at its best then you may want to finish that bottle within 30 days. It is said once the bottle hits that one-third mark you should invite some pals over to finish it up. The oxidation process is much more rushed once the whiskey gets to this point and thus it’s taste profile will be altered more rapidly than a fuller bottle.

Tequila: Like whiskey, tequila does not go bad if left sealed, and may in fact taste exactly the same 20 years from the day it was placed in its bottle. Liquor storage is important, though. Tequila should be kept in a cool dark place to optimize its shelf life. As with other liquors, tequila should be kept upright to avoid making contact with the cork or lid, which can have ill effects on the taste of the spirit. After opening, tequila can last for years, but it is recommended that you enjoy it within a few months so it tastes the absolute best for your palate. Both the sweetness and the bite of good tequilas will grow more neutral over time, after the bottle has been opened.

Cordials and Liqueurs: Less durable than their hard liquor counterparts, cordials aren’t so lucky when it comes to chilling on the shelf for years at a time. While some cordials and liqueurs can remain intact for maybe a year or two, most of the time, the sugar and other preservatives will leave it deteriorating after only a few months. Cream based liqueurs such as Bailey’s or Kahlua only have a shelf life of up to 18 months before they start to break down. Does Bailey’s need to be refrigerated? The consensus is the refrigeration makes no difference, as long as it’s stored at room temperature. Most of these more delicate and questionable drinks will feature an expiration date on the bottle. If not, it’s a good idea to write your open date on the bottom in a Sharpie. That way, if you are hosting a party a few months down the road, you can get a sense of whether or not to spring for a new bottle. Utilizing protective stainless steel pourers is also a good way to prevent contaminants from getting inside your bottles.

Garnishes and Non-Alcoholic Ingredients: While you may not have to keep a super keen eye on your liquors, you do of course have to pay more attention to your mixers and cocktail enhancers. While your honey and sugar may last indefinitely, garnishes such as basil and rosemary last anywhere from one to three years depending on how it is stored. When it comes to carbonated beverages such as sodas, they can remain in good quality for up to three months after the designated expiration date. Bottled and canned juice however can last far longer, and can remain usable for up to one year. Keep in mind that the fuller a bottle is, the longer it will remain intact, due to oxidation the more air allowed to mix with a liquid the faster the taste deteriorates.

Wine: The shelf life of wine is very dependent on the style of wine and the way it is stored. While wine can stay fresh for years if unopened, wine can only remain fresh after opening for approximately 3 days. Although, who are we all kidding? Wine normally goes pretty quickly (when it’s in my kitchen at least). Similar to liquor, wine also needs to be kept in a cool dark cellar, or cabinet but alternately should be stored on its side and not upright like liquor should be. While wine is okay to keep in your normal food fridge, any more than that and you risk your wine becoming too dry or freezing which could cause the cork to expand and slip out of the lip. In an opposite environment, if your wine is too hot this can lead to it growing flat, and thus losing its taste profile. An ideal temperature for both reds and whites is somewhere between 45-65 degrees Fahrenheit. Wine stoppers will extend the life a few extra days.

Beer: Beer may be the most delicate alcohol of all. Don’t lie! At some point we have all had to run out of the door, half a beer still in hand, popped it in the fridge in hopes we will drink it once we return. After a day or two, your unfinished beer might still taste okay, but past the third and we are getting in disgustingly flat beer territory. A lot of beers, if over 9%, can age pretty well if not open for months at a time, but once opened try to drink it so it does not lose it’s tasty carbonation. This principle remains the same for other carbonated beverages such as malt liquor or wine coolers. Basic rule of thumb? There’s no reason to keep an unsealed beer around, c’mon and chug that baby! If chugging isn’t an option, beer bottle savers go a long way to keep your brews fizzy.