A Beginner’s Guide to Whiskey 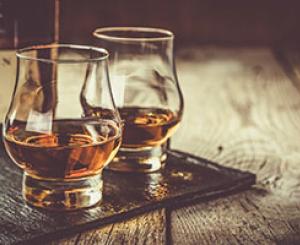 Real men drink whiskey, unfortunately getting into the world of whiskey can be more than a little daunting to the uninitiated.

With so many different brands, varieties, terms, ways to drink and strong opinions in the mix any beginner whiskey drinker will benefit from a helpful starter guide. Below you’ll find everything you need to know to fool even the most devout whiskey enthusiast.

Whiskey is the generic term given to distilled spirits made from grain mash. Bourbon, Rye and Scotch are all types of whiskey; as such they are all similar in taste and appearance. The difference between the types of whiskey depend on the types of grain used, the location in which it was distilled, the length of ageing and the type of casks used in the process.

Each type of whiskey has its own rules and regulations governing the type: for example you cannot make scotch outside of Scotland.

Where to Get Started

The first question a new whiskey drinker asks is which type of whiskey to try first. The best answer to this is to start with the whiskey with the best selection where you live. If you’re American you’re going to want to get into bourbon, if you’re Canadian you’ll want to look into scotch.

The reason for this is economic: the more selection you have of a specific type of whiskey, the more likely you are to find quality bottles at lower prices.

Regardless of which style of whiskey you’re trying first try to talk to someone who knows a thing or two about the selection at hand. You will want to start with a good beginner whiskey, something light and easy on the palate. If your first foray into whiskey is with an Islay scotch, you may derail yourself before you ever get started.

Scotch: Get a reasonably priced highland malt: Aberlour 10 or a Glenmorangie 12

There are three subtypes of whiskey. Single malt whiskey is made from mixing whiskey all distilled at the same distillery, the age being the age of the youngest whiskey added. This is the most common type of whiskey you will encounter. Single cask whiskey is bottled entirely from a single cask. This whiskey is typically only found from smaller distilleries or as novelty/high-end lines from some of the major ones.

Blended whiskey is made by blending together whiskey of the same main type (it’s exceptionally rare for people to mix types, such as scotch with bourbon).

You will run into people who will act as though blended whiskey is a joke, which isn’t entirely true. Some companies, such as Johnnie Walker, only make blended whisky. They don’t distill any of their own spirits, instead choosing whisky from other distilleries with specific traits to mix and blend into a new drink.

Some blended whiskey can be very good, but as a beginner it’s best to stick to single malts. This way you can begin to learn what you truly like and do not like in a whiskey, as to have an opinion before you try to decide if Johnnie Walker Blue Label is worth the price tag.

How to Drink Whiskey

Now that you bought yourself a bottle of golden fire, you need to figure out how to drink it. There are four ways to drink whiskey:

Whiskey neat (just room temperature whiskey in a glass) is considered by many to be the only “pure” way to drink a good whiskey. The concept is to taste the spirit as it was distilled, rather than diluting it as the distiller hadn’t intended.

While the logic behind this is solid, this is typically a very poor way to drink a fine whiskey.

The best way to drink good whiskey is with some water. While people will claim adding water will open up the bouquet and a bunch of other random things, the real reason is more functional.

First, take a tiny sip of your whiskey neat. Chances are, especially if it’s cask strength, you will feel your taste buds buzzing as the liquid hits your tongue. This is the alcohol anesthetizing your taste buds. If you continue to drink the whiskey neat, you will eventually lose the ability to truly taste the drink; your tongue will grow numb.

You should add just a capful of water (only ever use clear distilled or spring water. Chlorine will ruin you drink). If after another small taste you still feel that “buzzing” add another capful. Repeat this until you have the minimum amount of water possible, without melting your tongue. Now you can enjoy the entire glass, tasting it truly through the last drop.

Many whiskey drinkers like their spirit on the rocks. The argument against this is two-fold:

Ice is typically made from tap water, meaning it’s full of chlorine.

As the ice melts it will water down your drink, well past the point of simply adding some water.

If you like to drink ice-cold whiskey you can get around these issues by making your own ice from high-quality water and by keeping a dish and a small spoon next to your glass so you can remove the ice once the whiskey is watered to your liking.

Finally you can mix whiskey into a cocktail or mixed drink. If you’re doing this please do not use high-end whiskey. While one should never drink the cheapest/worst whiskey you can buy, use middle-ground spirits for your cocktails. You always want to be drinking quality whiskey, but mixing $300 bourbon into a whiskey bourbon sour is a stupid, wasteful, act.

Suggestion: Bulleit bourbon. It’s not too expensive, but it’s a terrific drink to have on its own or in a whiskey cocktail.

It’s all About You

If someone tries to tell you otherwise, just smile and know they’re just being a snob.