Craft Beer Slang 101: How to Talk Like a Beer Geek 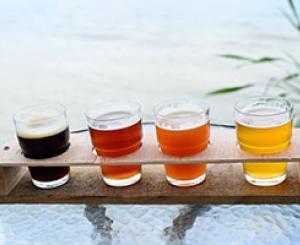 From "shelf turds" to "fish killers," we decode the idiosyncratic language of the beer world, with the help of some experts.

At its heart, brewing beer is simply another form of cooking. “I’m just making oatmeal” or “Just whipping up some soup,” has humbly been said by many a brewer at work. Perhaps it’s no surprise then that just like chefs, brewers have their own slang for when they’re working in their own kitchens—the brewery.

Unlike so many culinary slang terms which have escaped the back room and become popularized thanks to all those cable cooking shows, brewing argot remains a bit of a mystery. Even many savvy beer drinkers can struggle to explain certain processes, to know just what things are actually called. What is un-fermented beer known as? Who’s this Brett guy? Why does my favorite brewer keep “sparging” things? That doesn’t sound healthy.

Likewise, hardcore craft beer fans have developed their own pervasive slang, more nerd parlance than anything else. In fact, go to a big-time beer geek event and you might accidentally think you stumbled into Comic-Con: Bearded, chubby dudes in logoed t-shirts and cargo shorts, talking a language you can technically understand, but which doesn’t make a whole lot of sense contextually.

“Whales” and “shelf turds.” Is that beer “crushable” or a “drain pour”? And, oh, should we meet for a “share” next weekend? Sometimes you might even wonder if these geeks are intentionally being goofy, tongue firmly planted in cheek as they wonder if all these people waiting in line to buy a rare IPA are actually “mules.”

To help understand this unique industry vernacular, we reached out to a handful of brewers for help:

Trub is the lees, or layer of sediment, at the bottom of the fermenter after the yeast has completed the bulk of the fermentation. "Baptism by trub" is when a new brewer accidentally gets hit with some form of cold beer yeast, hops, or trub while on the job.—Schulz

31 U.S. gallons. A unit that breweries use to measure yearly output. A common “keg” is actually a half barrel, or 15.5 gallons.—Danger

Abbreviation for “barrel” and how brewers measure all beer (ie: “I brew on a 5 bbl system” or “I brewed 2000 bbls last year.”) —Schulz

When beer geeks congregate and bring along beers to share with other collectors. These bottles are often expensive, rare, and more coveted beers, allowing more people to taste limited offerings.—Schulz

The wooden stopper in old-style Hoff-Stevens kegs. It needs to be removed (“de-bunged”) with a bung hammer and then replaced (“bunging the keg”) when cleaning and filling the kegs.—Urlaub

A fully-automated brewery, usually made in Germany.—Danger

The level of carbonation of a beer in volumes of CO2.—Alcorn

To lower the temperature on a fermenter to make the yeast go dormant and sink to the bottom of the fermenter.—Danger

A unique can/growler hybrid, first created by Oskar Blues Brewery, which is becoming increasingly popular at certain bars and breweries. Prison City has a Crowler system.—Schulz

An easy-going, super-drinkable beer. These are well-balanced beers with low-to-medium alcohol by volume (ABV) but tons of flavor that make you want to go back for more. “Oh man, Founders All Day IPA is so crushable."—Kujawski

“Drop Everything And Drink.” This is when everyone working in the brewery stops to taste samples of beer going to the canning line immediately before it runs, which acts as a measure of quality control.—Urlaub

A beer that has a noticeable buttery/butterscotch flavor due to improper fermentation.—Danger

A beer that is so bad you have to pour it down the drain instead of drinking it. Labeling certain coveted beers as “drain pours” has become a sport amongst the snobbiest of beer geeks.—Schulz

A six-pack ringing machine, so called because the plastic rings have long been rumored to kill marine life who get stuck in them.—Danger

Flocculation refers to the ability of yeast to bind together after fermentation has occurred and fall out of solution. Generally, Belgian beers and wild yeast beers do not like to flocc, and thus create cloudier beers like witbiers and saisons. (As we say, “Brett don’t give a flocc.”)—Floan

A combination of fittings used to pull yeast and hops from the bottom port of a fermenter. It is shaped like a goose’s neck.—Alcorn

Term of endearment for a 32-ounce growler.—Adams

An over-carbonated beer, so called because it immediately gushes out of the bottle once opened, usually making a mess and causing you to lose beer.—Danger

Beers with increased ethanol and thus a higher ABV.—Floan

A device used to extract essential oils and flavors from beer ingredients such as hops (or vanilla beans). See “torpedo” below, another name for the device.—Danger

The phrase shouted to let folks know that the brewers are sending water to a tank in the cellar, so that someone walking by does not get inadvertently soaked.—Urlaub

A descriptive term used for New England-style IPAs, meaning it has a citrus fruit character (courtesy of certain hops) and juice-like mouth-feel.—Schulz

Pronounced “love” and short for lovibond, a standard of measurement for the color of beer/grains. Higher lov indicates darker color.—Floan

Cans of beer that fall below the minimum fill level for a quality cans. These cans are given to the brewers to be “destructively tested.”—Urlaub

An early step in the brewing process in which grain is mixed with hot water.—Danger

A later step in the brewing process in which spent grain is separated from the wort.—Danger

The screen filter basket in the hop rocket/torpedo.—Danger

A person who stands in a beer line to get a limited release beer for another person, surely inspired by the term “drug mule.” —Schulz

A device used for sampling beer directly from a bright tank. It keeps the beer from foaming up.—Danger

Add yeast to wort, which begins the fermentation process.—Danger

A device on a fermentation vessel which is used to take samples of beer for measurements and taste.—Alcorn

A common beer easily found at your local store or, even worse, grocery story. This is not even necessarily a bad beer (i.e. “Can you believe KBS is turding it up at Whole Foods?”)

The barley left over after mashing in. Breweries often give it to local farmers to feed their pigs, or even use it for bread, pizza crust, or cookies.—Schulz

Checking off beers you want to try, usually just by having a sip or two of them. Ticking is often the sport of looking for new beers just for the sake of “ticking (them) off” or saying you’ve tried them. A “ticker” is someone who participates in such activities.—Schulz

A device used to extract essential oils and flavors from beer ingredients such as hops.—Danger

An ultra-rare beer you may never find, so dubbed in honor of Ahab and his long-time search for Moby Dick. The rarest of the rare are sometimes called “white whales.” (“Pliny isn’t a whale—Cantillon Don Quijote, now that’s a whale!”)

Liquid from grain that is boiled in the kettle with hops before going into the fermenter. Essentially, un-fermented beer. —Danger