10 Easy Cocktails Everyone Should Know How to Make at Home 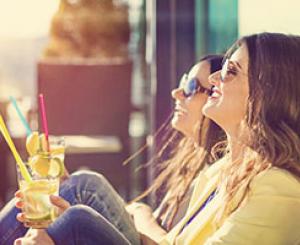 From the margarita to the Manhattan, these are the cocktail recipes you can always depend on.

While today's tweezer-wielding chefs often steer clear of old-timey dishes like Beef Wellington and Baked Alaska, mixologists still revel in the past. In fact, even the most avant-garde, smoked and foamed, molecular gastro-cocktail bars are still expected to tip their caps to the classics. Why? Because these drinks have been honed so perfectly over the years, they never go out of style. Don’t know how to whip up a flawless Manhattan or Martini? Then maybe you shouldn’t be selling your ten-ingredient car-crash of a cocktail for $15 a coupe.

Moses Laboy is one such bartender who has mastered the past, while continuing to play in the present. As the cocktail and beverage director at Bottle & Bine in midtown Manhattan, he presents a cocktail menu heavy on culinary ingredients and experimental flourishes, like an entire subset of “butter-washed” cocktails. Still, his favorite drink to whip up at home remains the humble Negroni.

As Laboy will tell you, it’s not too hard to celebrate many time-tested classics in your very own home. Sometimes all it takes is the ability to squeeze a few limes or pour a mixer until you're happy with the ratios. With less than a dozen different bottles, some decent ice, and glassware—and quick insights from Laboy on why these drinks remain classics that we still sip today—you too can become a competent at-home mixologist.

Here are 10 cocktails you should be making at home.

Backstory: Cocktail historians have tried to track down the Negroni Zero for decades, but the still most-repeated story (possibly apocryphal) is that Count Camillo Negroni once asked a Café Casoni bartender to improve his Americano (Campari, sweet vermouth, and club soda) by using gin instead of soda water. A bit of a “bartender’s handshake” back in the day, the drink is rife for creating inventive variants, thanks to its equal parts sweet, bitter, and boozy, and played a crucial role in our modern cocktail revival.

Why it’s a classic: “Thank you Count Camillo Negroni for acquiring a taste for strong liquor while working as a rodeo clown in America. The need to satisfy your craving led the way to transforming the low ABV Americano into the paradigmatic Negroni. Hands down my favorite classic drink. Balancing sweet, bitter and strong to create the perfect cocktail."—Laboy

Stir with ice for 20-30 seconds. Strain into coupe glass. Garnish with orange peel.

Backstory: It might seem hard to write the history of a drink in which every ingredient is in the name. Seems self-evident, no? Still, some genius was the first to combine the two—in this case, the clever gents in the army of the British East India Company. It wasn’t just a tasty way to get their jollies off while bored. With malaria present in 1800s India, the soldiers had taken to mixing the bitter cure-all quinine with water, sugar, lime, and, yes, gin.

Why it’s a classic: “It's the perfect, go-to warm weather drink. The lovely botanicals of a well-made gin combined with a good quinine and a healthy squeeze of a lime wedge is just what the doctor prescribed.”—Laboy

Backstory: Mr. Bond may have made it a household name, but the most famous of all cocktails had been around a century earlier. The Italian vermouth brand Martini appears in 1863, which may lend the drink its name. At the same time, though, in San Francisco, something called the Martinez had become a popular local libation. The Martinez not only had gin and vermouth, but also bitters and Maraschino. Once those latter two ingredients were stripped away, the classic Martini had emerged. It’s a drink so simple that every Martini lover eventually settles on their own preferred recipe, whether it's one that's super-dry, way-dirty, on the rocks or off.

Why it’s a classic: "Elegant botanicals from the gin are rounded out by the dry vermouth, then tied together either by a brine-y olive or the citrus essence of a lemon twist. This classic is as elegant as it gets for the mature imbiber."—Laboy

Add contents to ice-filled mixing glass or metal shaker. Stir, don’t shake, for about 10 seconds. Strain into a coupe or cocktail glass and garnish with a lemon peel.

Backstory: We presume the cocktail was first poured in Manhattan, but whether that was at the snooty Manhattan Club in the 1870s or in other locales on the isle in the years beforehand has yet to be determined. The drink has always had sweet vermouth, bitters, and whiskey, but over the years that latter ingredient has jumped around between bourbon, rye, and even Canadian Club. As rye made its triumphant return in the last decade, it has come to rule the roost. And new variants of the easily-made, 2:1 cocktail have also emerged, many with Brooklyn neighborhood names like the Red Hook and Bensonhurst.

Why it’s a classic: “A Manhattan brings the spiciness of rye whiskey balanced by the sweetness of fortified wine vermouth. This is a great entry level cocktail for the person just discovering American whiskey, yet still a joy for the more developed cocktail consumer.”—Laboy

Stir the ingredients with cracked ice, then strain into in a chilled coupe. Garnish with an orange twist or brandied cherry (none of that cheap maraschino bullshit).

Backstory: By now one of the most oft-bastardized drinks, the original daiquiri didn't come in some Slurpee-like contraption on the back bar. It was said to be invented in the town of Santiago de Cuba by an American during the Spanish-American War. By the early-1900s, it had made its way to America where it became the favorite drink of everyone from JFK to Hemingway (though, the “Hemingway Daiquiri” is now a slightly different variant). It was likewise the favored drink of the late Sasha Petraske, one of the most influential personas in the modern cocktail revival, who helped his patrons learn how this drink should actually be made.

Why it’s a classic: “The Daiquiri is a delicious combination of sweet, sour, and strong. Very easy to make, but just as easy to mess up. This is the ‘Hey chef, make me the perfect omelet’ of the bartender world.”—Laboy

Combine ingredient in a mixing glass with ice and shake well. Strain into a coupe.

Backstory: A drink backed by a brand and even trademarked, the Dark ‘n’ Stormy still manages to feel hardly corporate while evoking relaxation and island life. The story goes there was an Englishman living in Bermuda who created a dark rum he named after himself—Gosling’s. Also on the tiny island were Royal Navy officers who liked mixing Mr. Gosling’s rum with the ginger beer they had been brewing to help combat their own seasickness. The drink was delicious, and the intriguing color and look of the cocktail led to its fanciful name.

Why it’s a classic: “This is a year-round, tasty, highball cocktail. Combining delicious dark rum, with spicy, sweet ginger beer and the acidity of a well squeezed lime wedge, it’s perfect for most all occasions.”—Laboy

Fill glass with ice, add, rum, then top with ginger beer. Squeeze in, then garnish with a lime wedge.

Backstory: The sidecar is named after the oddball motorcycle attachment first appeared around the end of the first World War. It’s locational start is a bigger debate, whether that was in a fancy hotel in Paris or a fancy gentleman’s club in London. Either way it was a massive hit, with its use of uniquely French ingredients such as Cognac and Cointreau.

Why it’s a classic: "It's boozy and acidic with a dry finish. I like to take a page from the brandy crusta and finish it with a half-sugar rim, making it into a sort of deconstructed cocktail. Great aperitif or, if truly in the mood, a perfect nightcap.”—Laboy

Twist the rim of a coupe into a plate of sugar so it attaches to the glass’s rim. Add all ingredients to a cocktail shaker with ice and shake until chilled. Strain into sugar-rimmed coupe and garnish with an orange peel.

Backstory: While not quite as popular today as the others on this list, the Gimlet still remains an enduring classic, mainly, because it’s a piece of cake to make at home. It is said the name comes from a Sir Thomas Gimelette, Surgeon General of the Royal Navy, who was adding lime juice to gin to help his sailors combat scurvy (it seems most British-created drinks were simply made to battle ailments). Unlike other classics that would be ruined with anything but fresh-squeezed juice, the Gimlet specifically calls for bottled lime juice, namely Rose’s, which was available to sailors on long voyages when a sack of fresh-picked limes weren’t.

Why it’s a classic: “The gimlet is a combination of gin and lime cordial—though, these days with fresher ingredients being used behind bars, fresh lime juice with a touch of sugar appears too. It is a perfect, easy drinking cocktail to enjoy on a summer’s day by the pool.”—Laboy

Shake well with cracked ice, then strain into a chilled cocktail glass.

Backstory: Like most cocktails, the Margarita’s origins are also murky, though the tales that have followed it to the present are about as good as it gets. Most place the drink’s creation in Tijuana, its name being a salute to an eponymous woman of one man’s unrequited affections. The best story I’ve heard? That a Tijuana nightclub owner crafted the tantalizing drink to impress a performer named Margarita Cansino—who would eventually become famous under her stage name Rita Hayworth. Nowadays, the Marg is often seem as a chain restaurant booze-bomb in a giant blue glass, but like the Daiquiri, when made simply at home it is a balanced, elegant drink.

Why it’s a classic: "It's a gift from the agave gods. It has stood the test of time by bringing sweetness and acidity into perfect harmony. Whether you prefer it on the rocks or straight up with a salted rim, or even a frozen version on the beach, this is the O.G. party starter."—Laboy

Rub a lime wedge over the rim of a rocks glass (or Margarita glass) then twist on a plate of coarse salt so it attaches. Shake the ingredients with cracked ice, then strain into a glass over ice.

Backstory: The Champagne Cocktail dates all the way back to legendary barman Jerry Thomas. In his 1862 book How to Mix Drinks:  Bon Vivant’s Companion, the “Professor” sets forth the standard recipe for a sparkling wine cocktail which still lives on to this day. Back in Thomas’s day it was known as “Chorus Girl's Milk,” and it remains one of the few “famous” Champagne cocktails.

Why it’s a classic: “It's first truly sophisticated classic cocktail, giving you the strength of brandy with the effervescent, classiness of champagne. Still the go-to cocktail at any dinner party.”—Laboy